We had a lovely visit with the Pytel clan for Christmas, and now we're hunkered down at home awaiting the storm. So far lots of snow in the air, not so much sticking to the ground.

Noah got a robot for Christmas, and has been playing with it a lot. And by playing with it, I mean directing it to walk places and talking to it. "Over here robot! Go in closet robot! Wrong way robot!" Also earlier today the robot helped give Henry a diaper change.

Obviously this adorableness stops as soon as I get out the camera. But then he started taking pictures of his turtle and his badger so I figured it was worth it to show the video anyway.

So I guess it's been a while. It's been crazy around here. Let's see...
Hanukkah happened... 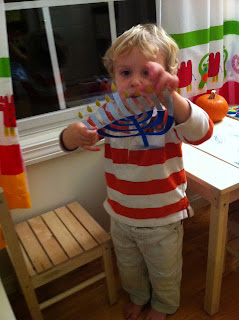 And that was fun. Then we got the stomach flu. 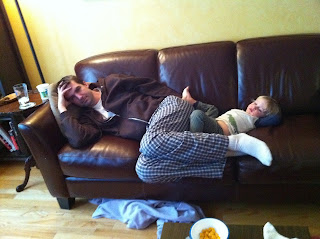 That was decidedly NOT fun. But did make us very grateful for our neighbor that brought us popsicles.
In more fun news, I am getting very pregnant... 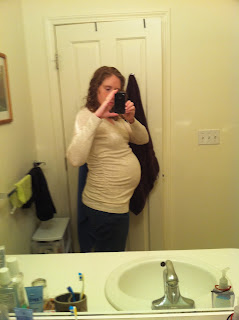 And we bought a house. This was exhausting but we are very, very, very excited. 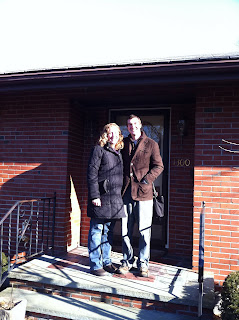 More to follow on the house front. In other news, snow! Amelia taught Noah all about how fun the snow is this morning.

So in summary, life is good, busy, more house, less vomit. I'll try to keep you better updated.
Posted by Rachel at 7:34 PM No comments:

It was a beautiful weekend.

We went to the park.

I subject you to this next one because I was trying to capture Noah's running narration. Unfortunately, the leaves make it kind of hard to hear, but you can try to follow along:

Condensed subtitles (he repeats a lot of this stuff): wire, big stick, big rocks, come down there, all done woods, more woods, wire, come daddy!, leaves, leaves (no idea what this word is), ouch, orange

Unfortunately I was not taping when he first went into the woods and declared "Woods! Grammy in there!" I think there is some confusion about which woods Grammy lives in. Apparently it is not this tiny patch of trees in the park.

Then last night we had a great time at our temple's Hanukkah party. Noah was able to sit still for several minutes (!!!) while we lit candles and sang songs, then he painted a menorah, then disassembled said menorah while waiting for the rest of the group to finish. We then watched a short performance by Levi the clown. I know, I also thought it was a bit odd to have a clown at a temple Hanukkah party, but the kids (including Noah) absolutely loved it so I ended up impressed. Noah was very excited to "eat latkes" but didn't actually end up eating any latkes, he did enjoy using a spoon to spread sour cream all over our plates. Finally, we left to go home and had about the cutest scene ever:

It was awesome. And even more impressive when we were talking about the party before bed and Noah said (unprompted) "Moon behind cloud." It is just amazing to me to watch his language and memory develop.

Overall, an excellent weekend!
Posted by Rachel at 10:04 AM No comments:

Noah loves to play in his closet. He will often ask for me to turn the light on and then go in there, close the door, and entertain himself by singing a song or whatever. I sit outside and laugh.

It's like his own little clubhouse!
Posted by Rachel at 8:54 PM No comments: