Today we took Noah to the Ithaca Sciencecenter. He thought the dinosaur skull was pretty interesting. 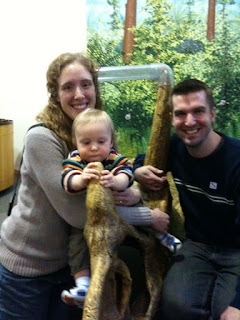 Unfortunately Chad refused to have Noah hold the sign that said "greetings from atop the triceratops," which would have been cute. But I digress.

Noah's favorite activity by far was the duck pond. Never has he imagined so many rubber ducks in one place! 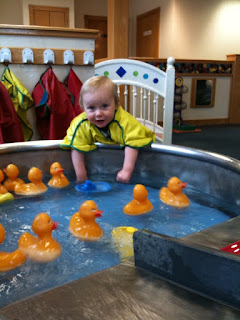 With duck slides! And waterfalls! And other kids (not pictured) to stare at! 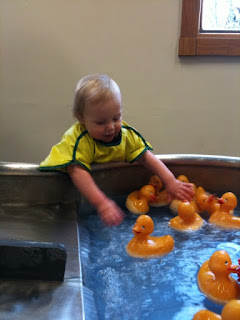 We spent a lot of time following Noah around as he toddled around the museum, stopping now and then to work on something. 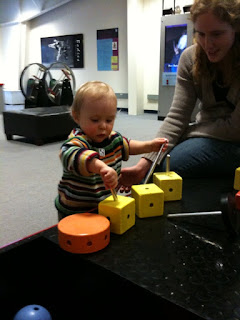 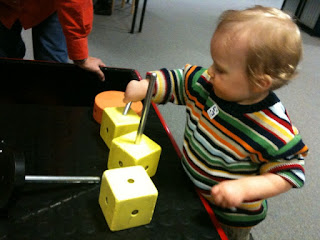 The point of this particular exhibit was to build up a structure that would balance on a small base, to illustrate the concept of center of gravity, but for an almost-one-year-old, I think "the metal stick goes into the hole" is cognitive leap enough. 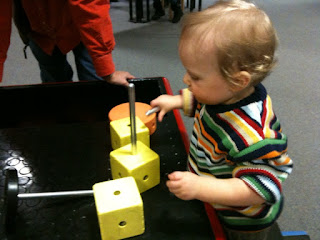 As we walked around we would sometimes pass an exhibit that was playing music. This was especially cute, as Noah would stop and dance a little bit before moving on.

Before leaving, we all got to touch a 4.5 billion year old meteor. This was definitely one of the coolest things I have ever touched. 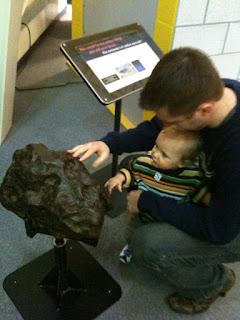 Yup, it's still coming down around here. Beautiful.

In order to best take advantage of the snow, Grammy Sue got Noah a sled.

And because we're at Grammy's house, Mommy gets to stay warm inside and take pictures from the porch. :)

Posted by Rachel at 1:09 PM No comments:

We took Noah to the T-burg playground today to climb around in the snow.

The playground is good for climbing, and for bouncing with Grammy.

This was actually the first time he tolerated the mittens and boots for long enough to play in the snow.

Which, it turns out, is fascinating.

And then Noah left.

-- posted from the phone
Posted by Rachel at 4:48 PM No comments:

We had a lovely visit in Granby for Christmas, including lots of fun with the cousins and Noah's first (and second) sled ride.

Note to self: Remember earlier when I told you you'd be better off with silent movies? Seriously. Be quiet. You sound ridiculous.
Posted by Rachel at 6:26 PM 1 comment:

Noah has some very fun cousins to emulate...

Posted by Rachel at 3:28 PM No comments:

Two peas in a pod, I tell you.

Posted by Rachel at 6:57 PM No comments:

The problem with working full time is that even if you leave early it's almost dark by the time you get home to play in the snow...

Posted by Rachel at 5:27 PM No comments:

Either Noah got a tunnel for Hanukkah or he has discovered a portal to another dimension... 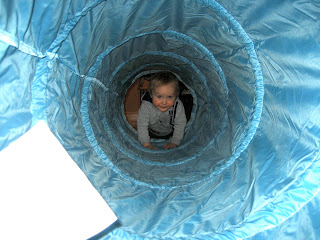 Oh no! This new dimension is not good at all!!! 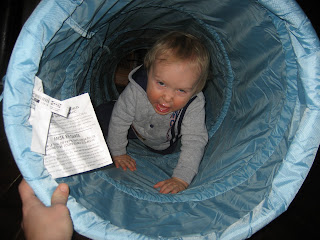 Also, we made it home from Boston safe and sound. Lots of snow, but happily none left on the highways.

Posted by Rachel at 9:33 PM No comments:

So we are in Boston this weekend, and are supposed to drive home this morning. There has been a small kink in this plan:

I am not sure this picture properly conveys the driving snow or the fact that south of here it is even worse (24 inches in Baltimore!?). But it does convey one thing I love about Boston: these people can handle the weather.

I took these photos at 8am on Sunday morning during a snowstorm, while walking to pick up some breakfast at a cafe, which was open with people dining there. There are people out walking and shoveling and doing what they need to do because guess what, it snows here and it's not the end of the world.

Whether the roads will be drivable anytime soon is to be determined. The aforementioned driving snow is not very encouraging...

Posted by Rachel at 8:35 AM No comments: 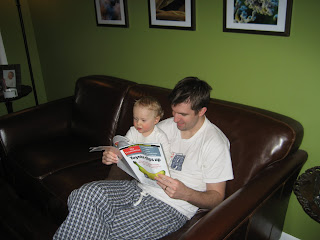 Yup, you're never too young to keep updated on the latest in world business.
Posted by Rachel at 9:12 PM No comments:

My mind, it is blown.

This post is dedicated to the things that I am astonished Noah can do. Beyond getting cuter every week, of course. First of all, he has been working on using a cup. A real cup, with no baby sippy attachment. 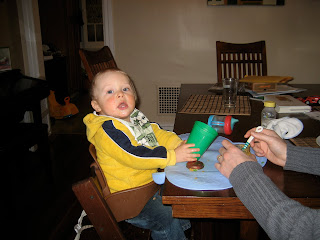 He actually does a decent job. 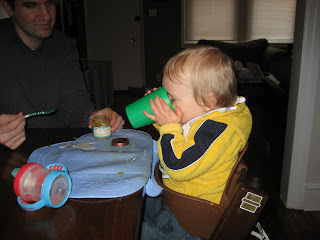 Until he gets bored and dumps it out. 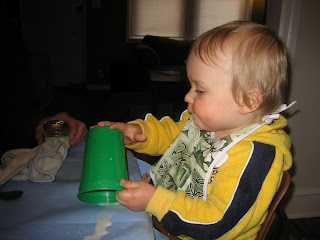 Oh well, better luck next time. In other culinary news, Noah is tired of us messing with his bananas and wants to eat them himself. 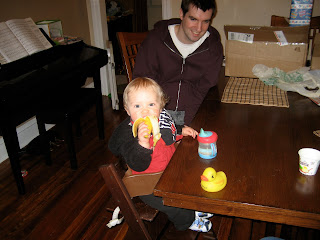 See, Grammy? I told you I can eat the banana myself. 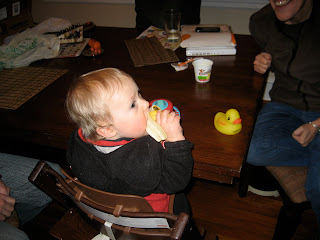 And finally, the most mind-blowing thing he did this week. Chad and I were making dinner, which involved stirring some vegetables in a wok using a wooden spoon. Noah was getting impatient, so I gave him his own wooden spoon and set him on the floor. In the past, this has worked to distract him as he proceeds to bang the wooden spoon on things.

This time, however, he did this: 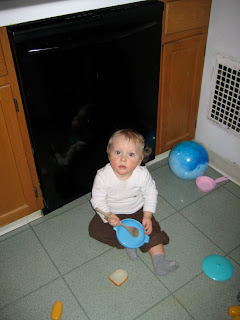 I KNOW! I did not give him that pot. He went over to his play kitchen, got it himself, and when I turned around he was stirring it with the spoon. Clearly a genius, this kid.
Posted by Rachel at 9:16 PM No comments:

We have been really enjoying celebrating Noah's first Hanukkah. 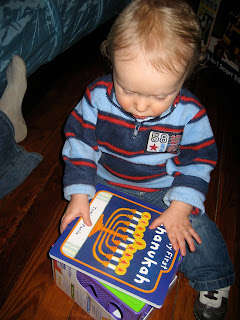 Noah would like to say thank you for his awesome gifts. We started with some practice, where Noah helped Grammy and Grammy Sue with their gift. Which was wrapped in paper. 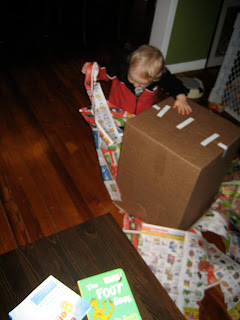 And I guess there was some stuff in the box, meh, whatever. 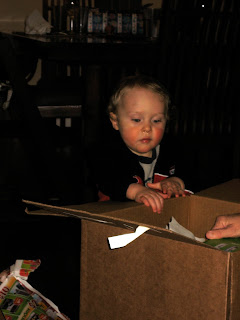 The exciting part was the paper. 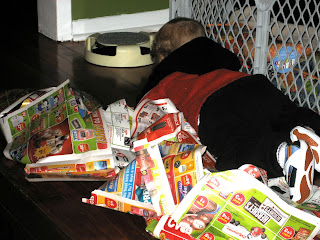 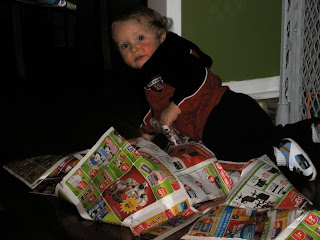 Eventually we wrangled him away from the paper so he could work on his own gift, this one from Grammy. 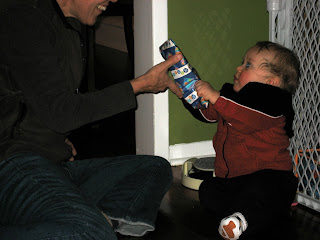 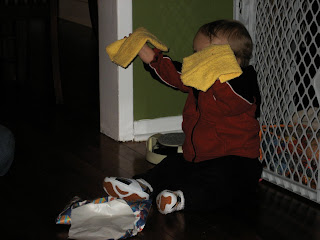 The next night Noah opened some great gifts from Saba and Nana. He's not really sure what to make of the popper toy... 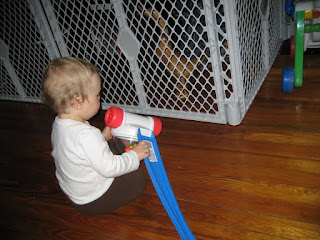 But the train, he understands. 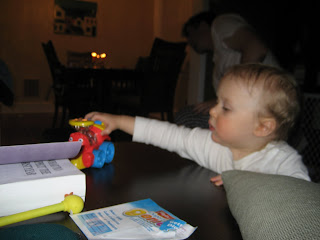 Dear Saba and Nana. Thank you for the gifts. Also, thank you for wrapping them in paper. I love paper. 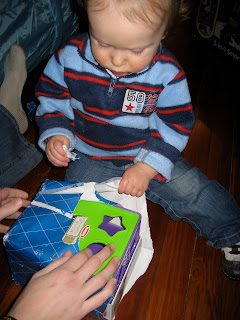 Dear Aunt Sarah and Uncle Alex. Thank you for the tricycle. Mommy says it is too dark and cold to ride it right now so she is just letting me play with the box. I love boxes. 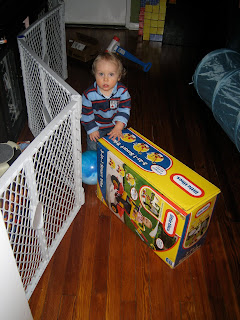 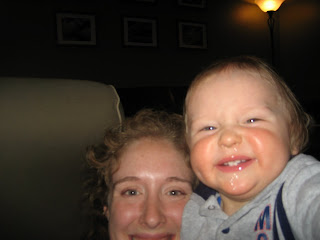 Posted by Rachel at 7:42 PM No comments: 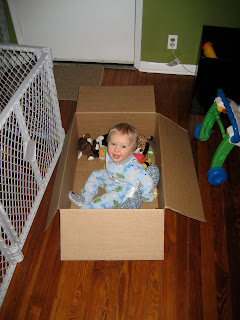 Stuffed animal variety package, available for a limited time only...
Posted by Rachel at 5:40 PM No comments: