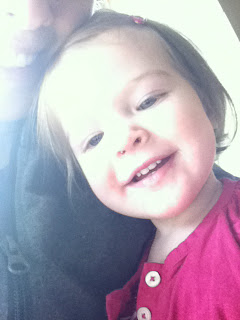 It is hard for me to believe you are a year old already, that it was an entire year ago that we brought you home from the hospital, tiny but already strong.  Sweet, and already intense. I can't believe how much you have grown since then, how many things you have learned.  You learned to nurse, to see, to sleep in your crib.  You learned to grab a toy, to roll over, to sit, and finally to crawl, to pull up, to cruise, to knee-walk, to walk. You learned to drink from a bottle, to eat from a spoon, to feed yourself finger food.  Today I gave you a whole piece of pizza and you did just fine. 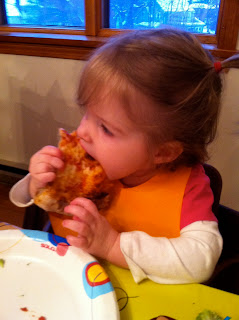 It is so exciting to see you continue to learn.  It's awesome to see you learn more signs and practice them without our asking.  To respond correctly when I ask you where your foot or your nose or your head is.  To pretend to feed your baby or drive a toy car or brush your hair.

On your first night, Daddy and I watched a movie while you slept on my chest.  You were perfectly content, until an actress in the movie started to cry, at which point you wailed along with her.  You continue to be tuned into the world around you, you seem to understand everything we say and do, and it is just amazing. 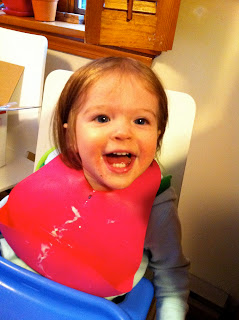 It is hard for me to believe that you are only a year old, that you have only been brightening our lives and cracking us up for only twelve short months.  You already know so much and are so much your own person. 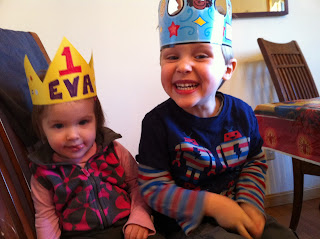 You are vivacious and energetic and to be blunt, loud.  Astonishingly loud.  You are a person who knows her own mind and refuses to be silenced. 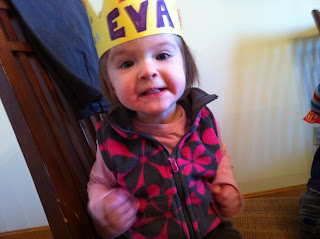 And my dear, that person is amazing. 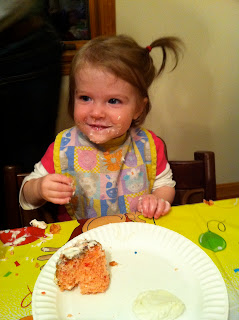 Happy birthday, my darling Eva Joyce.   We are so proud of you and love you so much.

I love to see them playing together, and it's awesome because they seem to really enjoy it.

Every once in a while mommy relaxes about her phone and lets Noah take some pictures.

How about we don't tell him the shuttle program got cancelled?
Posted by Rachel at 11:06 AM No comments:

I started using a new camera app this afternoon, and produced my new favorite picture ever.

Best game ever.  I appreciated their continuing to play, even though I didn't start taping until several minutes after they invented it.
Posted by Rachel at 10:03 PM No comments:

The Kia had some service this week, so the car seats have been living in the hallway. Eva loves them.

Posted by Rachel at 8:31 AM No comments:

Ok folks, almost a month after she actually learned how to walk, Eva has started actually walking.  She practiced a bunch at the gym today.

Congratulations on being three.  Three!

Congratulations on being able to climb to the top of the ladder in the gym and hop on one foot and leap from the top of whatever we allow you to leap from.  On figuring out how to ride a tricycle and a balance bike. On being able to get in and out of the car by yourself, brush and floss your own teeth, put on your own shoes and your own coat.

And I suppose I should also congratulate you on being able to do these things on your own schedule, even though your timeframe seldom aligns with mine and it drives me nuts.

You love books, you love to be read to, you correct our mistakes, you ask a million questions, you pick out letters that are in your name.  It's great to see how much your understand.  It makes me so happy to see you start to enjoy books on our own, to "read"to yourself or to your sister.

You love music, and are starting to blossom into a little musician.  Your constant singing and dancing are a delight.  You know the words to tons of songs and are often close to actually singing on pitch.  You like to play the piano but love the guitar.  I have started to become a bit concerned that you are going to grow up to be a rock star.

You are an amazing big brother.  You love and care for Eva, you share your snack and help her walk across the room.  You two tear around the house and crack each other up at the table.  It is clear Eva adores you, and it is clear you are a great role model for her.  Watching the two of you enjoy each other just makes my heart sing.

Noah, you have continued to astonish us this year.  You have firmly moved from toddler to preschooler. You can do so much physically, running and leaping and throwing and climbing and doing all the things regular school-age kids do. Your questions are more complex.  You do not accept the things we tell you until your follow up questions have been satisfied - you probe for inconsistencies and call us on them.

Quite frankly, it's a challenge to keep up with you.  A hilarious, exhausting, inspiring challenge, which we are honored to take on.

Happy Birthday, my sweet boy.  Congratulations on being Three.


(I know you didn't want your picture taken in your birthday crown from school, but I took a video anyway.  Hopefully you will forgive me in my attempt to capture your awesome birthday energy)
Posted by Rachel at 9:26 PM No comments:

Your daily dose of cuteness

Posted by Rachel at 9:12 AM No comments:

More on the keyboard

In case you were wondering, his pants were pinching him.  And he was hot in that shirt.  And those socks.  But he is committed to his art, even under these extreme circumstances.

Posted by Rachel at 9:45 AM No comments:

Auntie Jenn gave Noah a keyboard with a microphone for Christmas. Let's just say, it's a hit.

(in this video, Noah is pretending to be the Rabbi, who is apparently some kind of rock star because she sings into a microphone)

(other parents in the congregation have assured me this is totally normal, all the kids think she's a rock star when they are little)

(for the record, she is totally a rock star)
Posted by Rachel at 9:40 AM No comments:

We'd better have an update, because she is officially 11 months old. Good god. Since we last updated, Eva has started walking a bit more.  I'd say she's 70% knees, 30% feet at this point.  So we're making progress there.

To her communication arsenal, she has added the signs for "duck" and "cat."  She does both of these signs totally wrong, but her intentions are perfectly clear.  For duck she says "uck uck uck" and opens and closes her hand (to do the sign correctly, she would put that hand in front of her mouth like a duck bill).  Actually, she does this for any bird, not just duck.  We were looking at pictures of a snowy owl earlier and she was ucking like crazy.

For cat she says "diddy" and brushes her hair next to her ear (to do the sign correctly she would use her index finger and make a motion like smoothing a whisker in front of her cheek).  In both cases she is so consistent in what she does and clear in her intention I am willing to give her credit.  And I am really really trying to get a video, but no luck yet.

The signs she does correctly include "milk," "eat," "more," "potty," and "all-done." She has also started pointing to things she wants, then pointing to herself.  To apparently tell us she isn't just noticing something, she wants us to give it to her.   Like That Banana!  That one!  To me!!  Give it to me!!!  It's pretty cute.

She has done this pointing trick a few times to (I think) self-identify.  When I was facetiming with Sarah and Charlotte she pointed to the picture of us in the corner, then pointed to herself.  When Saba was giving her her bath, she pointed to the picture of a baby on the soap bottle, then pointed to herself.  Who knows what was really going on in her head.  I am totally sure when she is trying to say duck, I'd say I'm 20% sure when she is trying to point out herself.
In addition to her signing tricks, she can say "up" perfectly clearly when she wants to get picked up or climb on something. She has been saying "mamama" or "dadada" for myself or Chad for a while now. She can do a few animal sounds with some consisetency: a cow says "mmmmmmmm," a duck says "ak ak", a bird says "deet deet", and a lion or bear says "aaaaagrrh." It's awesome when she sees a picture and then says the sound and looks up at you smiling because she knows she did something clever.
Every once in a while she does other things that sort of shock me into realizing how much she knows is going on. 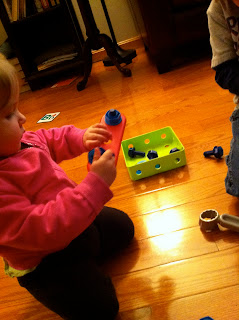 Like when Noah gets a building toy for Hanukkah and she knee-walks over to pick up a bolt, then knee walks over somewhere else to pick up a plate, then puts the bolt through the hole in the plate. 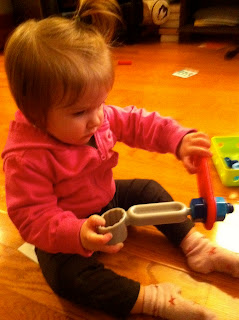 Or when she all on her own decides to give Tigger a ride on the duck.  (She did this for about 5 minutes before I got a video, so by the time I was filming she was kind of ready to move on)

My brilliant little bouncer.
Posted by Rachel at 9:35 AM No comments:

Says Noah, who got a new haircut to celebrate the occasion.

Ok, I know I make some comment to this effect every time I cut his hair, but I cannot get over how much older he looks.  It's like I have been somehow holding him back in preschool by keeping his hair long and after it's cut he is going to get whisked off to kindergarten.

At any rate, we celebrated new years eve with the traditional carrot and chicken sausage pizza.

I asked Noah if there was anything he wanted to do better next year, he answered he wanted to go to the gym.  I told him that a lot of grown-ups felt the same way.