Moving in is high excitement for the truck-obsessed among us.

even the playground helps

Things Noah has done on the playground today:
1. In above picture: spin the wheel and yell "woah" a bunch of times
2. Make friends with a couple of guys with motorcycles
3. Step on and off the curb yelling "wheeee" a bunch of times
4. Use a wood chip as a phone, yelling "hello!" and "mine!" into it over and over
5. GO DOWN THE SLIDE ALL BY HIMSELF. Seriously. From going up the stairs to standing up at the end I was not involved. Once he got to the bottom he just smirked, said "wheee" and ran off. My god, he's so old.
6. Chatter to himself constantly. He is old and funny.
-- posted from the phone

Posted by Rachel at 1:03 PM No comments:

Safe and sound, but tired.

Noah would like to give you a tour of our new kitchen, but that will have to wait until tomorrow.

Such a relief to be here!

Posted by Rachel at 7:04 PM No comments:

Yes, that is man playing arpeggios on the trombone at a rest stop in Connecticut. Taken from across the parking lot because I am a creepy paparazzi blogger.

If you forget your trombone, you could run after the birds instead.

And fight to walk against the wind.

This trip is so wierd - we've made this drive so many times before it feels very normal. I'm not sure I fully realize we're not going back in a few days.

Posted by Rachel at 4:20 PM No comments:

What? You don't think that deserves to be its own step?

Posted by Rachel at 1:51 PM No comments:

Step 3: Back to Massachusetts

Put on the Guster album, Noah is ready to go.

What's that Noah? You have a special jacket on for the occasion?

And it begins. Starting this final drive is bittersweet, but we're all eager to be done. Especially the cats. Here we go!

Woohoo! We're free!! And we're packed into our car and ready to go.

The cats are unsure about this whole process. Now we're off to pick up Noah from his friend's house and hit the road!

After a crazy day yesterday (the movers didn't leave until 9:30pm) we are out. It's a little sad to say goodbye.

Goodbye house, we will miss you!

Posted by Rachel at 9:20 AM No comments:

Our movers are bad at estimating

First, they told us they'd finish everything yesterday and we might use up half of the truck. Then they said they'd be done by 1pm today. It's now after 6.

And they are worried our stuff isn't all going to fit in the truck.

Two different guys from the moving company walked through our house and declared it to be no problem. Apparently they have no idea what no problem means. Sigh.


-- posted from the phone

Posted by Rachel at 6:23 PM No comments:

We move to Boston tomorrow. Wow. But instead of pictures of the death trap into which the movers have turned our house, I present pictures of our favorite playground that we visited to escape said death trap.

This playground is wheelchair accessible, whis is great for toddlers.

We close on our house at 10am tomorrow. Updates to follow.

Posted by Rachel at 5:04 PM No comments:

Posted by Rachel at 2:28 PM No comments:

Noah loves the laundry machine. He likes to point out when it spins and will say "woah" and clap when it stops.

Oh, and apparently today is no pants Thursday. We are supposed to go to the playground in a few minutes so hopefully I can convince him otherwise...

Posted by Rachel at 2:25 PM No comments:

Despite my best efforts to stall it, time keeps moving forward. We close a week from tomorrow.

Because of the whole house-selling thing, we didn't do a garden this year. We do have a volunteer onion (or at least I think it's an onion). Apparently onions can bloom. Who knew?

We had an awesome spring BBQ with a fire in the fire pit.

But apparently I was having so much fun I didn't take pictures. Sorry, dear reader. Instead, please enjoy these pictures of Noah at the mall.

It was raining today so we couldn't go to the park. He seemed to be ok with the compromise, as long as he got to control the radio.

How long do you think I have before he realizes this car gets even more fun if I put money in the slot?

Posted by Rachel at 8:36 PM No comments:

The Finger Lakes Basketball Camp ball lives on, and is still useful.

Doesn't bounce real well anymore, but does remind me of picking up Tania in an already full Nova on the way to Odessa...
Posted by Rachel at 9:26 PM No comments:

Hmm. What is this? 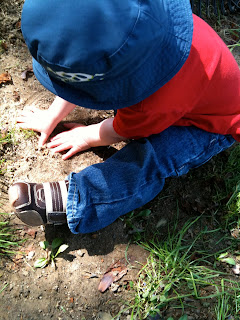 Hmm. Seems to be dirt. 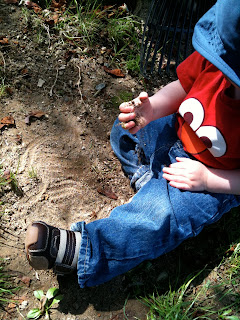 Maybe I should try poking it with a stick to be sure. 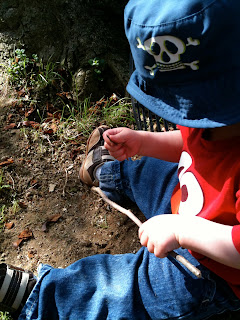 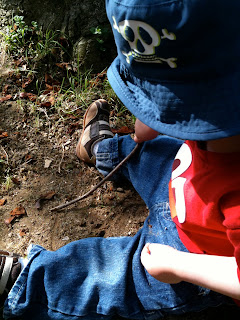 Seriously mom? This is blogworthy? 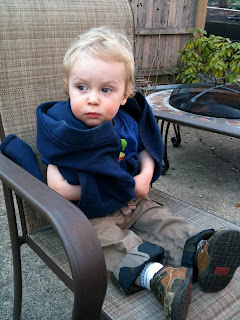 Yes, he is brilliant. Also, I am totally not biased in any way.

We had a lovely play date this weekend where Noah got to spend some quality time with his friends Maytal and Ben.  We walked to a local farm, and Noah helped Maytal stay on track. 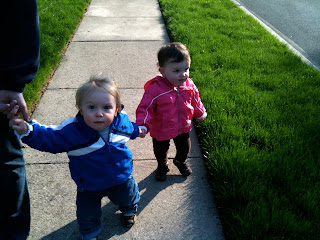 It was about the cutest thing ever.  They just looked at each other and then decided to hold hands, with no prompting from us.  They chatted a bit as well.  The cuteness was almost unbearable. 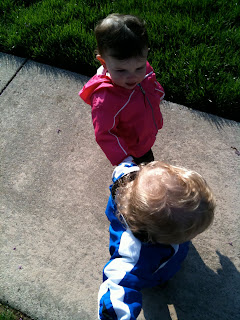 The donkeys were out at the farm. 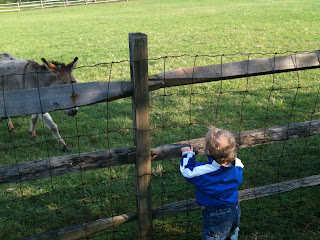 Noah was very brave, and fed the donkeys several carrots (not pictured.  Are you kidding me?  I may be "that parent" who is always taking pictures for her blog, but there is no way I am letting my 15 month old get that close to donkey teeth without my complete attention). 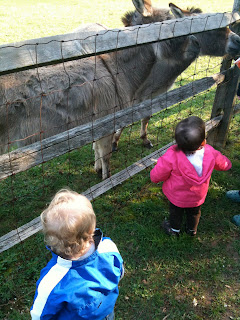 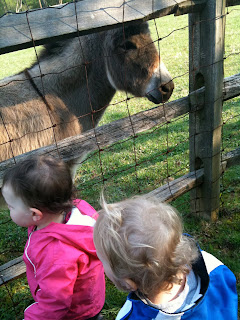 After the farm, we checked out the pond.  There were turtles! 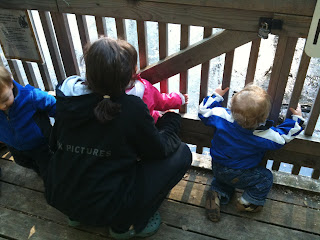 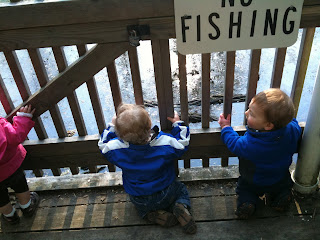 A lovely day overall.  We really learned something.  That something is that donkeys have very large and dexterous lips.
Posted by Rachel at 9:05 PM No comments:

Welcome to our new blog, Entropy Lives Here. You may notice this is exactly the same as our old blog, we just moved it to a web address not tied to our actual address. Since we're moving. To Boston. In about two weeks. Holy crap.

We started the blog in order to show you all the progress we were making on our first house. And then the home improvement projects slowed down and the blog was mostly about our cats. And then we had a baby, so why would we ever talk about anything else?

So who knows what the future will bring for our blog. Chances are, more stuff about Noah. With periodic comments about the cats. Let's be honest, I am just not all that creative. Also, I believe in giving the audience what they want.

So here's what you wanted, probably more than a long-winded story about blog-moving: a video of Noah. We went to the playground today.

His favorite phrase is totally "wheeeeeee! wheeeee!"
Posted by Rachel at 8:45 PM No comments:

Mommy and Daddy went to Florida and all I got was this T-shirt. 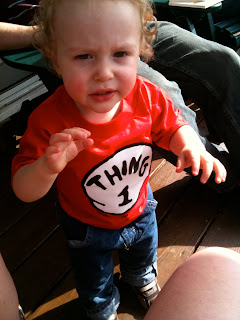 It's true. Can you believe it? We dealt with the unbelievable craziness that was the past few weeks by dropping Noah off with Grammy and getting the heck out of town.

On the way to Grammy's house, it was too beautiful for rest stops, so we stopped at a state park. Noah got a kick out of walking with Daddy by the water. 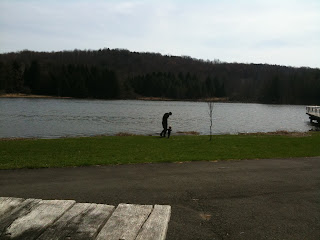 Then once we got to Grammy's house we went down to the lake to watch the waves. Noah loved this. He kept saying "wow" "wow" as the waves broke. 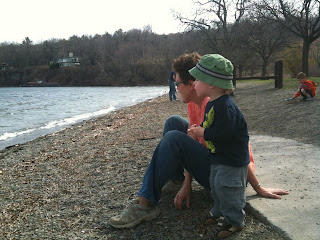 Also, for those of you not from the finger lakes, let me just mention that by "waves" I mean 8 inch swells. This is pretty rough seas for us. Anyway, on to the playground. Who wouldn't want to stay with these crazy kids for a few days while your parents are out of town? 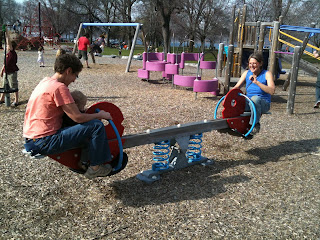 Also, there are music lessons.

Thank you very much to Mom and the Iphone, which kept us supplied with videos of Noah while we were away. :)

We had a lovely time in Orlando. Because we are crazy, we decided to squander one of our precious few sleeping in days to get up early to watch the space shuttle launch. Of course, we didn't bring a camera, so you'll have to make do with Iphone photos. Not bad, huh? 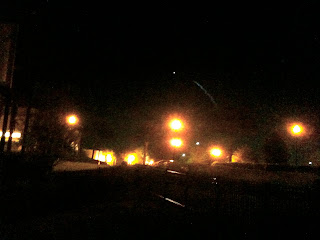 The shuttle trail looked awesome as the sun rose. 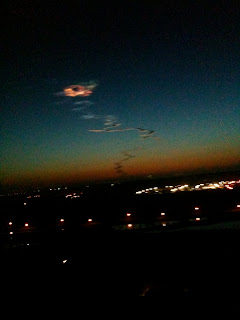 We spent one day at Universal Islands of Adventure. That was a trip. 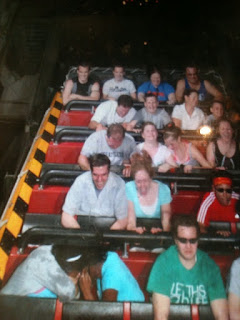 And a few more days laying around by the pool. It was great. And then it was time to head back home, so Noah could investigate the stuff all over his playground. 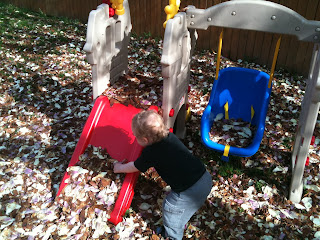 Oh wow. We were gone for less than a week and there are no blooms left on our tree. 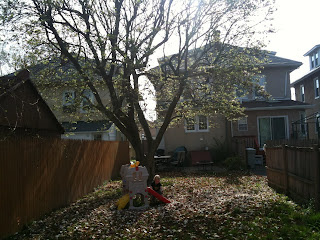 Apparently Spring is ending here in the tropics. Sorry Sarah!
Posted by Rachel at 9:22 PM No comments:

Adventures in the treetops

Noah and I met up with his friend Eliza and her mommy at the Morris Arboretum the other day. It was a beautiful day and the arboretum is just starting to bloom. However, by far the favorite activity for the toddlers was running around the Out on a Limb exhibit. This exhibit has some platforms and mesh climbing areas way up in the trees. 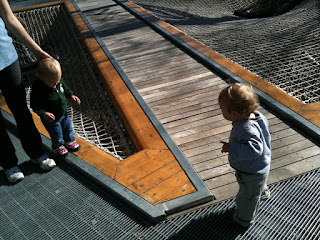 Which, it turns out, are WAY fun to run around. 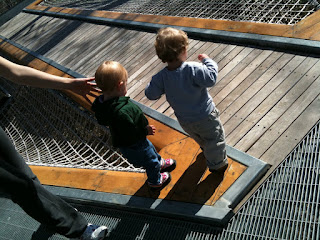 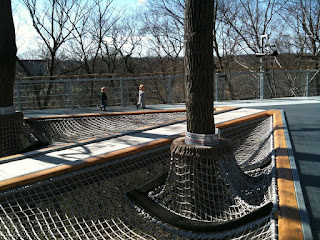 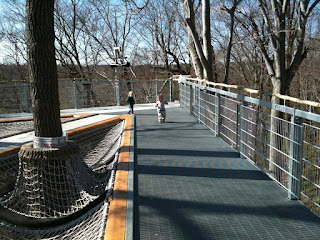 and around. You get the idea. 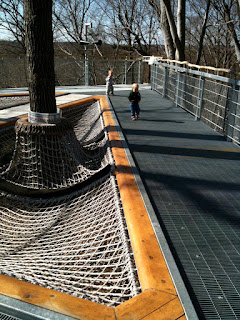 On the other end of the platform, there was a giant robin's nest. This was interesting enough to stop the running for about 5 minutes. 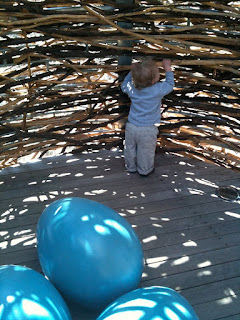 Overall, a great day. After dinner, we took a walk with Noah's bike to get some ice cream. After Nana's talk with him last week, it seems Noah has reconsidered his position on ice cream. 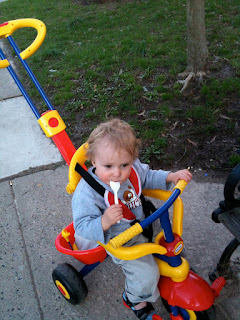