We'll be posting the daily dose of Noah here, both so we have a better running record and so we don't have to worry about who's getting the email. Eventually we'll post more about what's actually going on with him, but for now at least a picture a day seems manageable. :)

Also, we're changing the name of the blog since it's not just Chad and Rachel anymore. Also, now that we've been here a year an a half we've realized we don't actually live in Philadelphia. 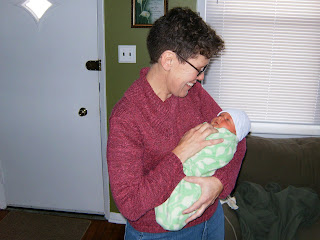 Noah (5 days old) with Grammy. We know, the number of days old is confusing, since he was born in the middle of the afternoon. We are assuming it will get less confusing after we start counting in weeks and months.