As I seem to have forgotten to mention in my last post, Chad and I were in Atlanta for the FIRST world championships. We are VIP guests (or rather, Chad is a VIP and I get to tag along) because Thoughbot is building a new registration platform for the First Lego League.

First is a robotics competition, with different competitions for kids of different ages (the total span is elementary – high school). My favorite is the Lego League, because these teams are by far the cutest – they’re 9-14 year olds from all over. They have to build a little robot out of legos that completes tasks on a game board. I like the Lego League because teams come in from all over. The team from Egypt (in lime green below) competing against the team from Utah (just off the left of the picture). The kids are very excited and creative. In front of team Egypt you find one of my favorite teams: the Fire Breathing Rubber Duckies. Seriously, that was their name. Clearly these kids are allowed to name their own teams. See the inflatable rubber duck tube as part of the team. 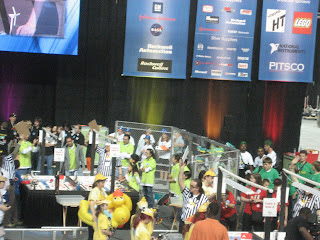 I am also partial to teams with lots of pink: see below for the girls from Saudi Arabia (they also get points for their kick-ass name: team Danger Mind) 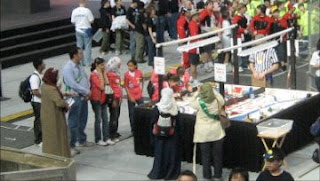 I also liked team Damsels in Charge, based on their pink boas. 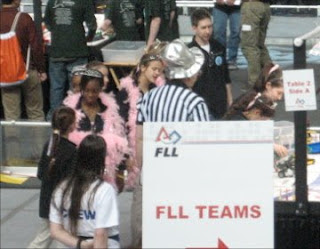 Perhaps the FLL core values (things like teamwork, creativity, professionalism, etc) are more important than pink, but since I'm not a judge I get to pick favorites for arbitrary and/or petty reasons.

The main event, however, was the First Robotics Challenge (FRC). In this year's challenge, the robots had to move around a track, and manipulate these gigantic balls. 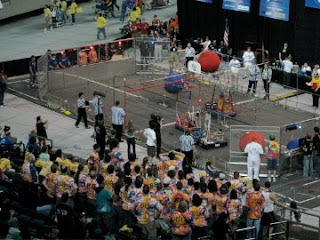 These robots are impressive - you can see in the picture how big they are. The kids have to build, program, and drive the robots, as well as represent their team to the judges. The teams are pretty serious - everyone in a tie-died t-shirt above is on the same team, watching their robot. One cool thing about the FRC tournament is that in each round, 6 teams compete in two groups of 3. So each round the teams have to be able to work with different people they've never met before. It is very easy to see how applicable the skills that high schoolers learn in FRC will be applicable in future careers. In addition to the teamwork and professionalism stuff, they're using serious technology that is directly applicable to a variety of industries. In summary, I was impressed.

The last night we were in Atlanta, we went to the FIRST VIP dinner at the Georgia Aquarium. This was such a cool place for a dinner - there were two big windows to the giant tanks, so we could see sting rays, whale sharks, and beluga wales. I also had the opportunity to see just how nerdy my husband is. (I generally know about his nerdiness, but occasionally he impresses even me). He was hoping to find a friend of his at the dinner, but when we couldn't see him anywhere Chad twittered that he was looking. I find this ridiculous. But not as ridiculous as the fact that HIS FRIEND CHECKED FOR THE TWITTER. See below for the two men checking their phones during the nice dinner to see where their communications got crossed. 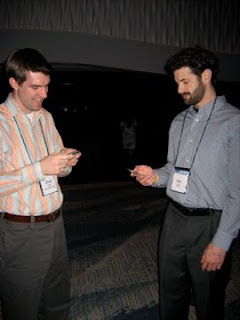 Maybe it's because my friends tell jokes about the Born-Oppenheimer Approximation (seriously, this came up at the bar on Sunday night), but I like getting confirmation that Chad's friends are dorkier.

Also this weekend: Seder at Dad's and Melanie (Moses! He's our Moses!), a beautiful wedding celebrating all things pink and green (Congratulations Chris and Sharon!!) and a great visit with Grandma and Grandpa (Sure we'll take passover service for 22!). Then we came home to crash. Is it any wonder I don't get posts up in a timely manner?
Posted by Rachel at 8:25 PM