Quitting my job so I can take my kid to the zoo at 2:30pm on a weekday was such a great idea. At that time, the zoo is awesome and perfect for toddlers who feel the need to run all over the place ("do you want to ride in the stroller for a while?" "no no no no no no!"). There is almost nobody at the zoo, and definitely not enough crazy people running around (aka older kids) to run him over. Apparently everyone else went home to take a nap. 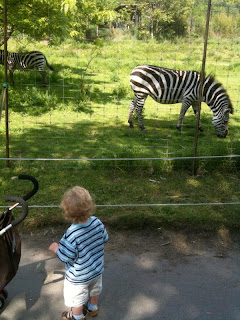 Noah examines a zebra. Or "bah!" as he likes to call them
We went to the Franklin Park Zoo, which, turns out, is awesome. It's pretty small, but the animals are in really big pens so they seem pretty relaxed. Also it's laid out so you can see the animals well. The animals are mixed up a bit - the zebra above was in a big yard with some other zebras and some ostriches (or "bee!"). 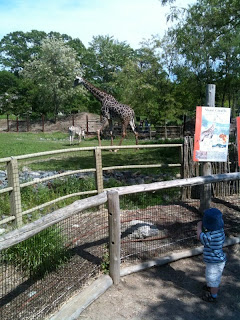 Noah checks out the giraffes and more zebras.
We saw Christopher the lion, who was just chilling out in the shade on top of his hill. Noah was totally unimpressed with the lion, preferring to run around the benches outside the lion area until some other moms pushing strollers came up to the window. Then we were all business. Noah pointed to the babies "baby!" and then pointed to the lion "die-o!" in order to tell them what to look at. I then asked him what the lion says and he responded "ROAR!" Apparently he has been paying attention after all. Also it was a nice opportunity to show off our genius child.

After we left to look at the tigers, Christopher let out a bunch of actual roars. I will just say an actual lion roaring is very impressive.

On the way up to the lion's area, Noah stopped to check out a (fake) elephant skeleton. I imagine this is what it was like for uncle John as well. But with fewer bones. And more lions (hopefully) 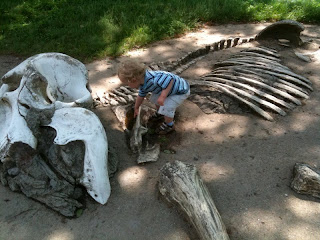 Noah prepares for his future career as a paleontologist
And of course, we don't go to any public place without spending some serious time on the playground. Especially when the playground has little trains with steering wheels. 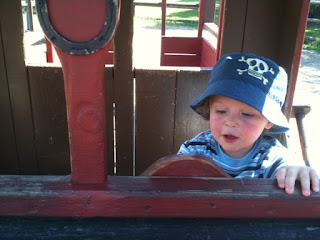 Noah prepares for his future career as an Engineer. But not the kind mommy had in mind.
Posted by Rachel at 1:45 PM