The problem with writing a state of the toddler post is that you keep thinking of other things he is doing after the fact. He can reliably count to four! The other day he counted to seven! He can recognize about half of the letters of the alphabet! He loves to help daddy make his coffee! Chad taught him how to pretend tap dance the other day and now sometimes when the music is on Noah will tap dance and will say "happy feet" and it is the cutest thing ever!

Basically, there is no hope of keeping up. If only there was some sort of hard covered book in which I could write all of this stuff.. .

Let's casually change the subject, shall we? Pumpkin Time!!

It's almost Halloween, so we brought home a "big pumpkin!" Noah was very excited about this, though didn't really understand what we were going to do... 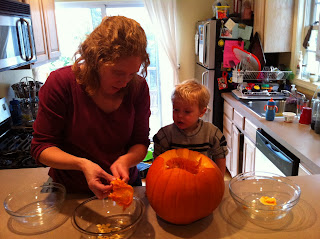 But after a bit of instruction he was all in. 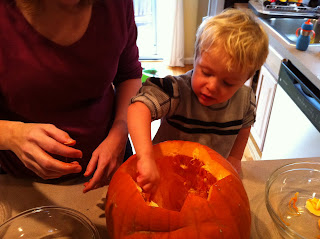 If by "all in" you mean highly amused, but not crazy about getting pumpkin slime on his fingers. 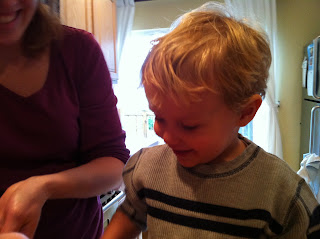 I guess I'll give that one to him, sticking your hand into an unknown slimy pit that is twice the size of your head might be a tiny bit intimidating.

After we finished carving the "big pumpkin!", we stuck a shabbat candle (the only kind of candle we have, apparently) inside and lit it up. This was highly confusing, resulting in Noah saying "shabbat!" over and over. 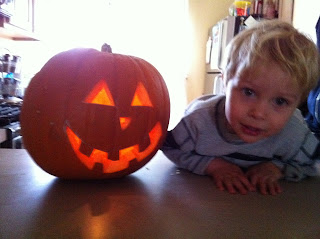 But with some coaching that was replaced with "ween! ween!" (halloween). 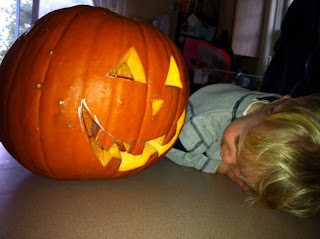 In other news, apparently Noah LOVES roasted pumpkin seeds! Clearly he has excellent taste. Now if we could just convince him to at least try on his costume...
Posted by Rachel at 9:10 AM