After the lagoon we headed to Reykjavik.  We walked around the city and ate dinner at a fish shack.  It was awesome, as you may expect.  After one night in Reykjavik, we started down the coast to Vik, stopping at some waterfalls. 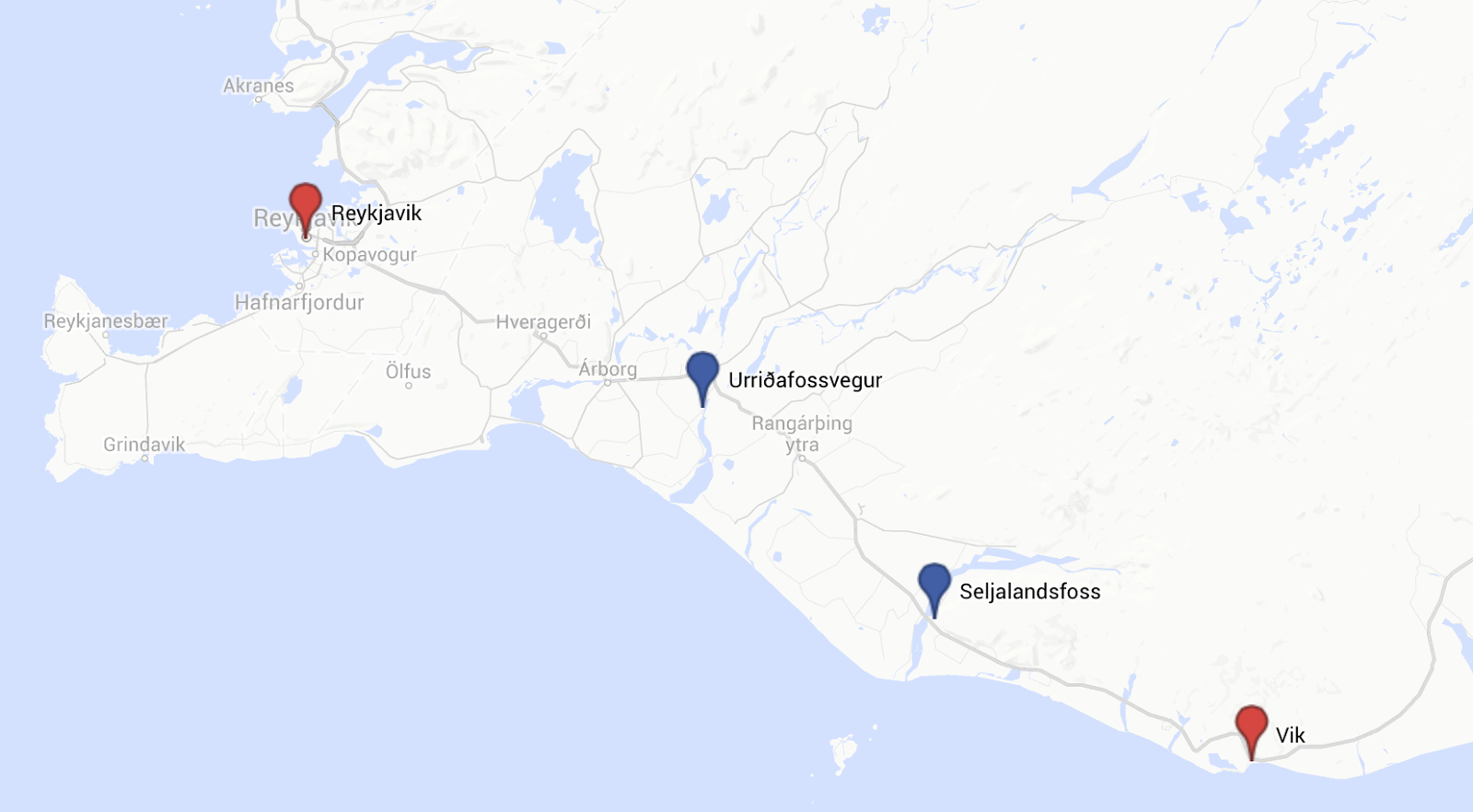 Our first Iceland roadside attraction experience was Urriðafoss.  In Iceland, a small white and red sign on the side of the road alerts you to an attraction.  You then turn off of the main road onto a small gravel road and follow for some number of kilometers.  There is often a sign telling you about the geology and history of the area.  And then if it's a small attraction, it's just... there.  No fuss.  With maybe a gravel pad for a few cars.  This was the case with Urriðafoss, where we just walked up and took some pictures. 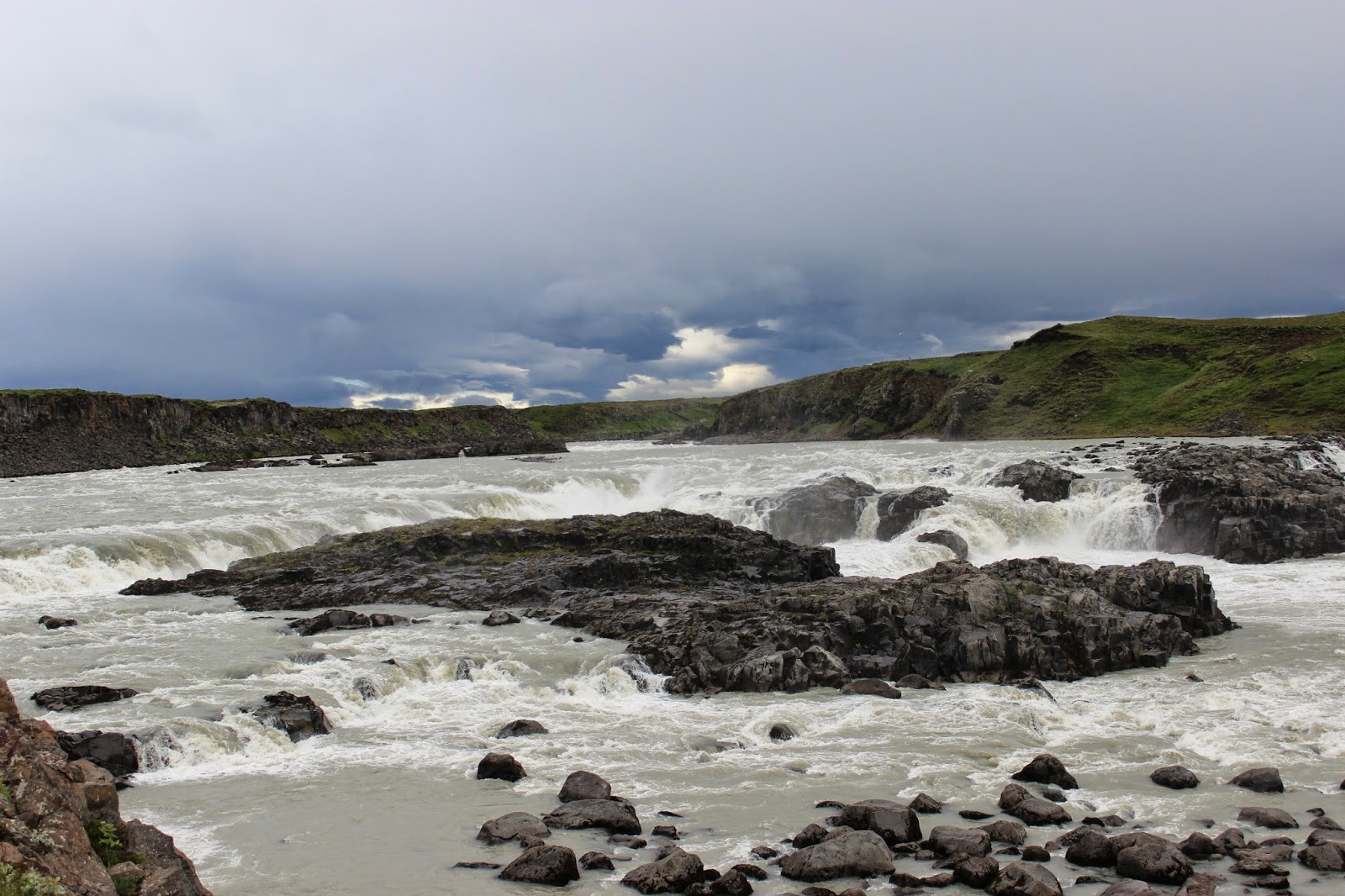 Apparently this waterfall is expected to disappear if current plans to build hydropower facilities upstream are executed.  We were happy to get to see it.

Also, it was really windy. 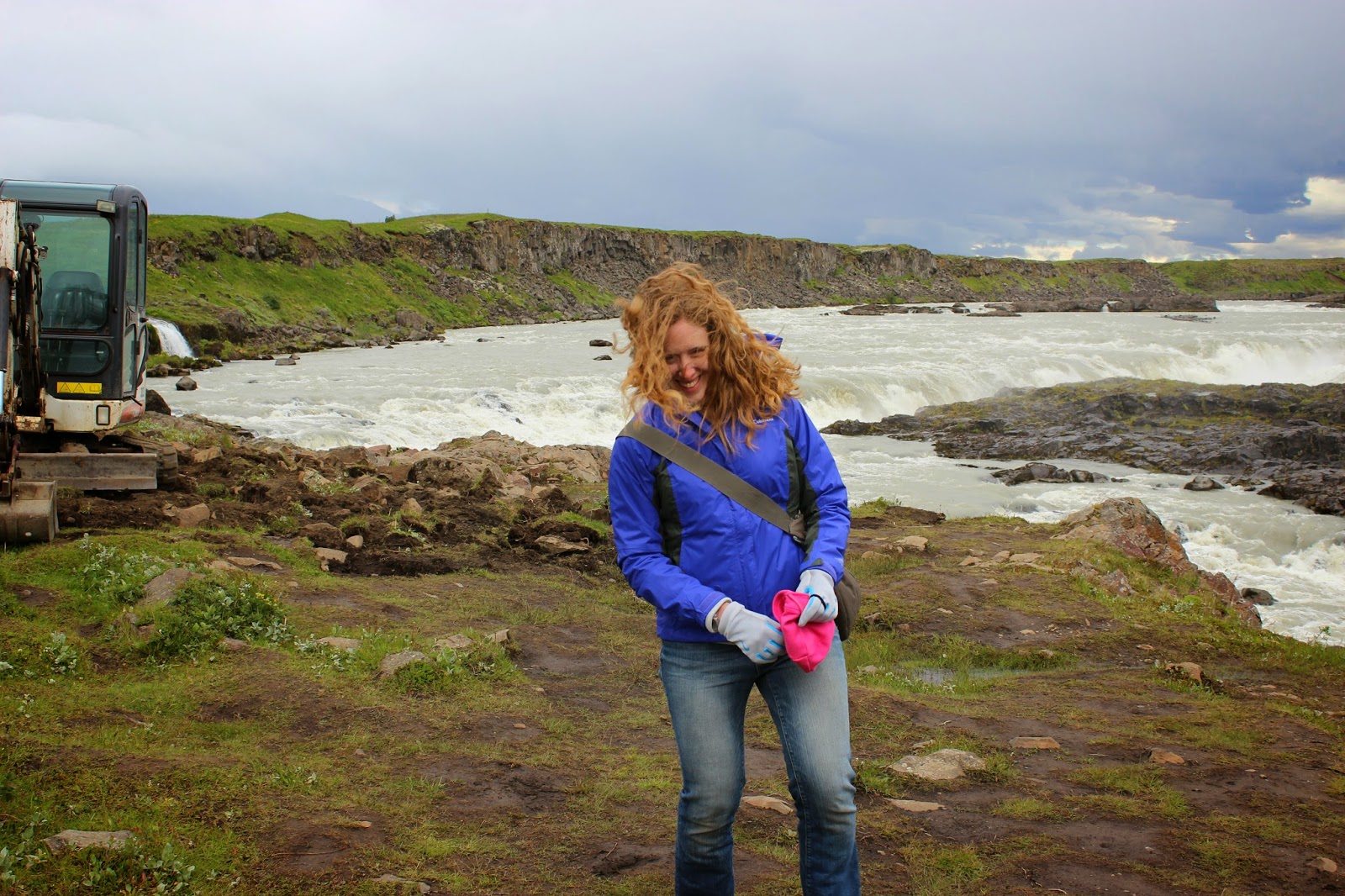 Next we headed down the road and saw Gljúfurárfoss (on the left, below) and Seljalandsfoss (on the right). 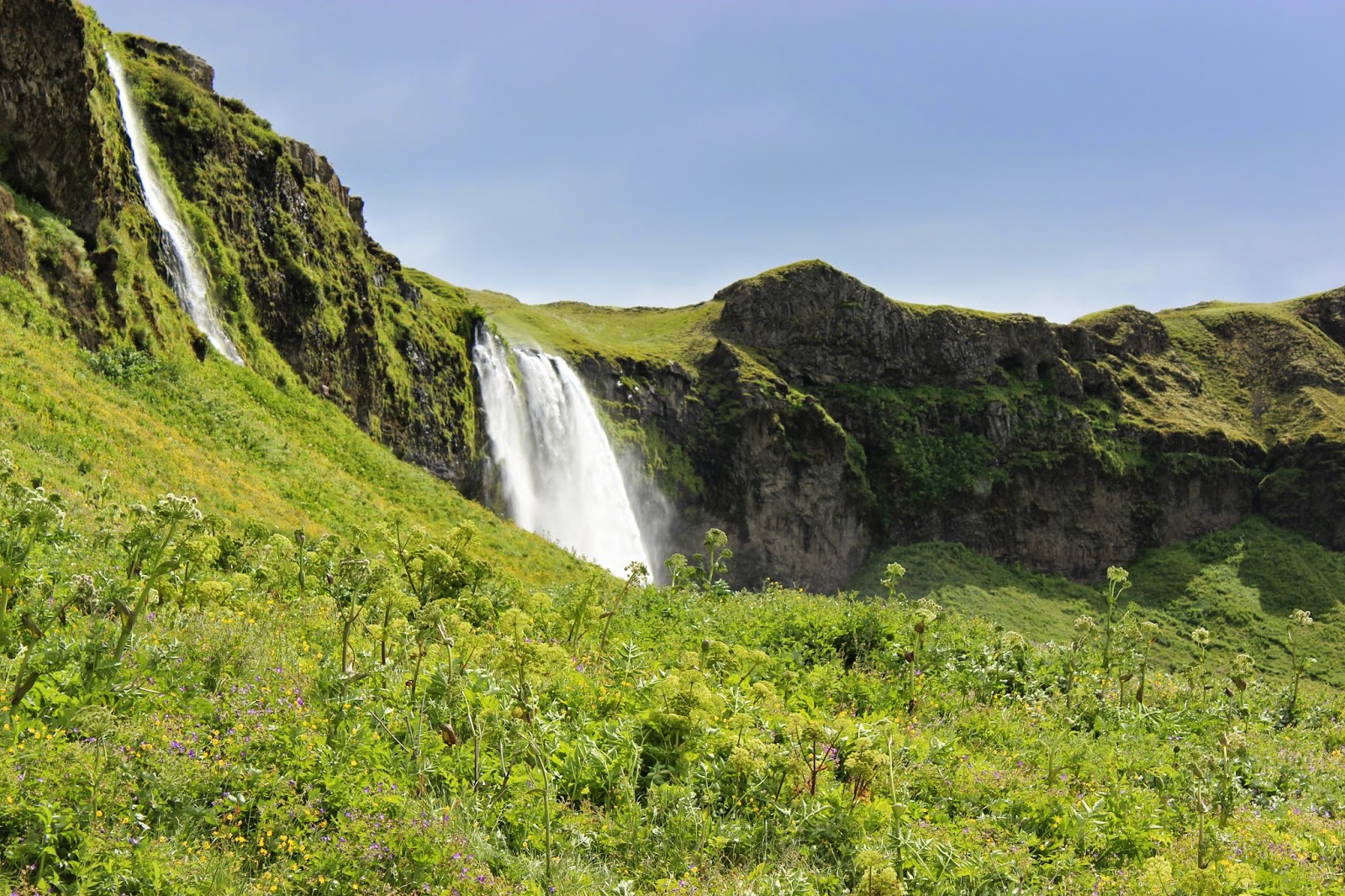 This landscape is clearly older than the area near the blue lagoon - look at all those wildflowers and plants!  After the volcano erupts, the lava hardens into rocks.  Moss grows on the rocks, and over thousands of years builds up and breaks down enough to form dirt.  Which then can grow grass and wildflowers.  And sheep.

That picture seems to be the only one I have where you see both waterfalls in the same shot, but it certainly doesn't show you how huge they were.  Let's try this one of Seljalandsfoss instead... 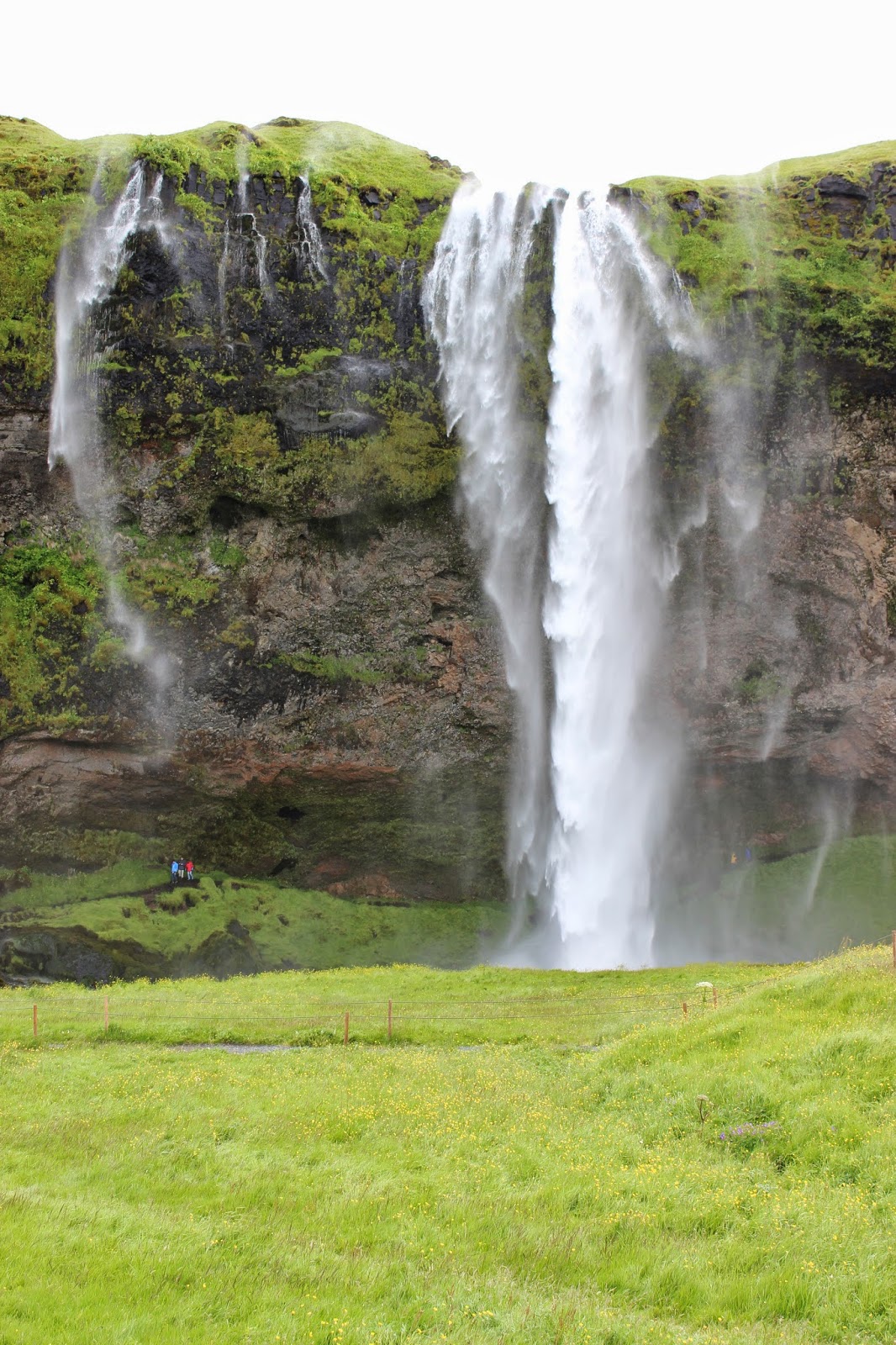 These were what we found to be typical of the larger type of Iceland tourist attraction.  Same tiny white and red sign, same gravel road, but then a larger parking lot, a bit of infrastructure (e.g. stairs or railings, maybe even bathrooms) and plenty of other tourists. 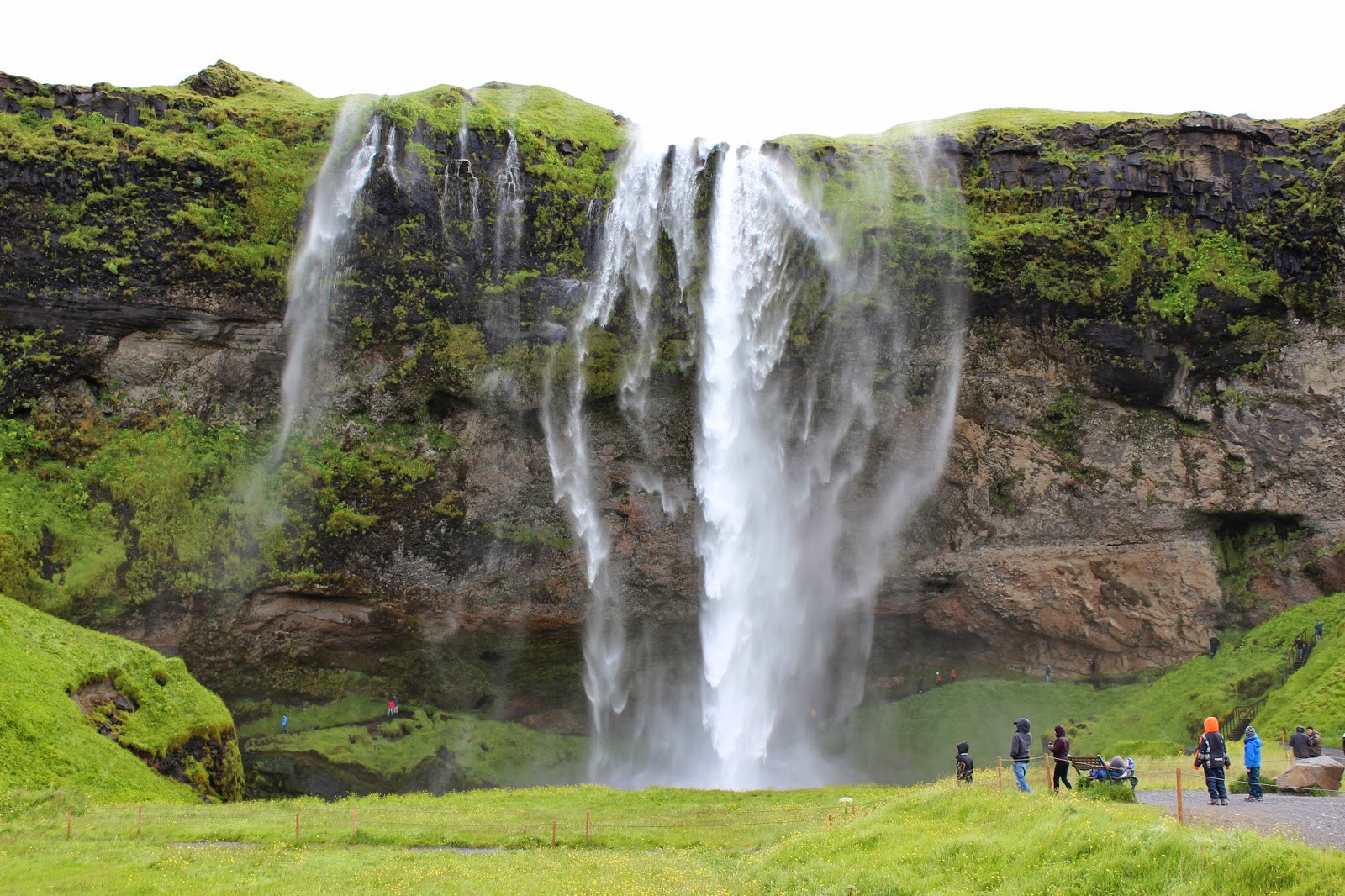 Also, you can really get up close to things.  At Seljalandsfoss we got to walk this little path behind the waterfall. 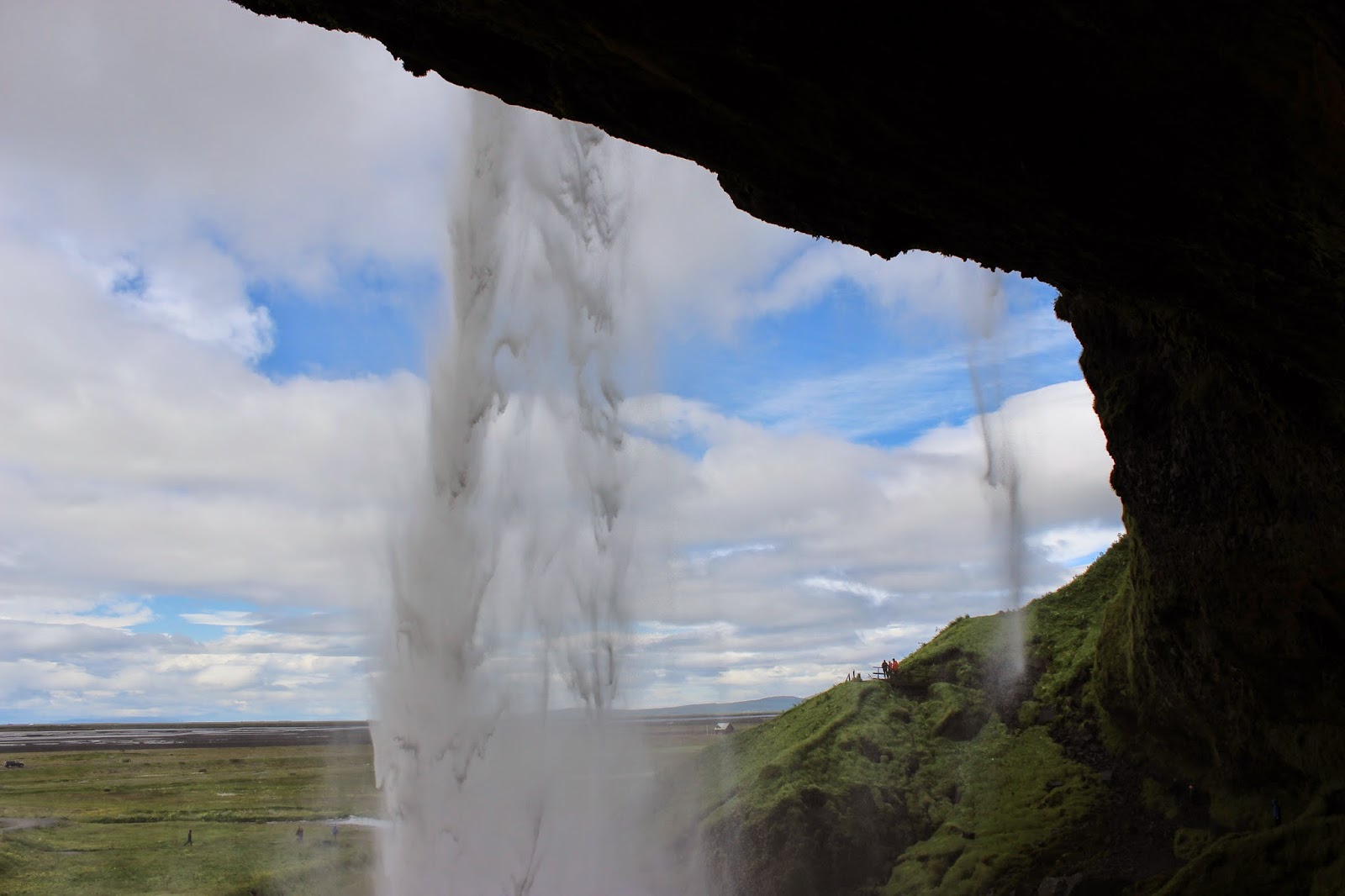 Again, the picture may be neat but doesn't at all communicate how loud it was back there.  There was really a lot of water.

Also typical of Iceland attractions, there was a small, slippery path with no signage, walls, guardrails, or really anything to prevent people from hurting themselves other than the general atmosphere of all the other tourists who were generally polite, neat, and following what one would expect to be the rules.  Clearly the litigation culture in Iceland is different from the US.

But it sure was spectacular.  Check out the red and green moss on the underside of the falls... 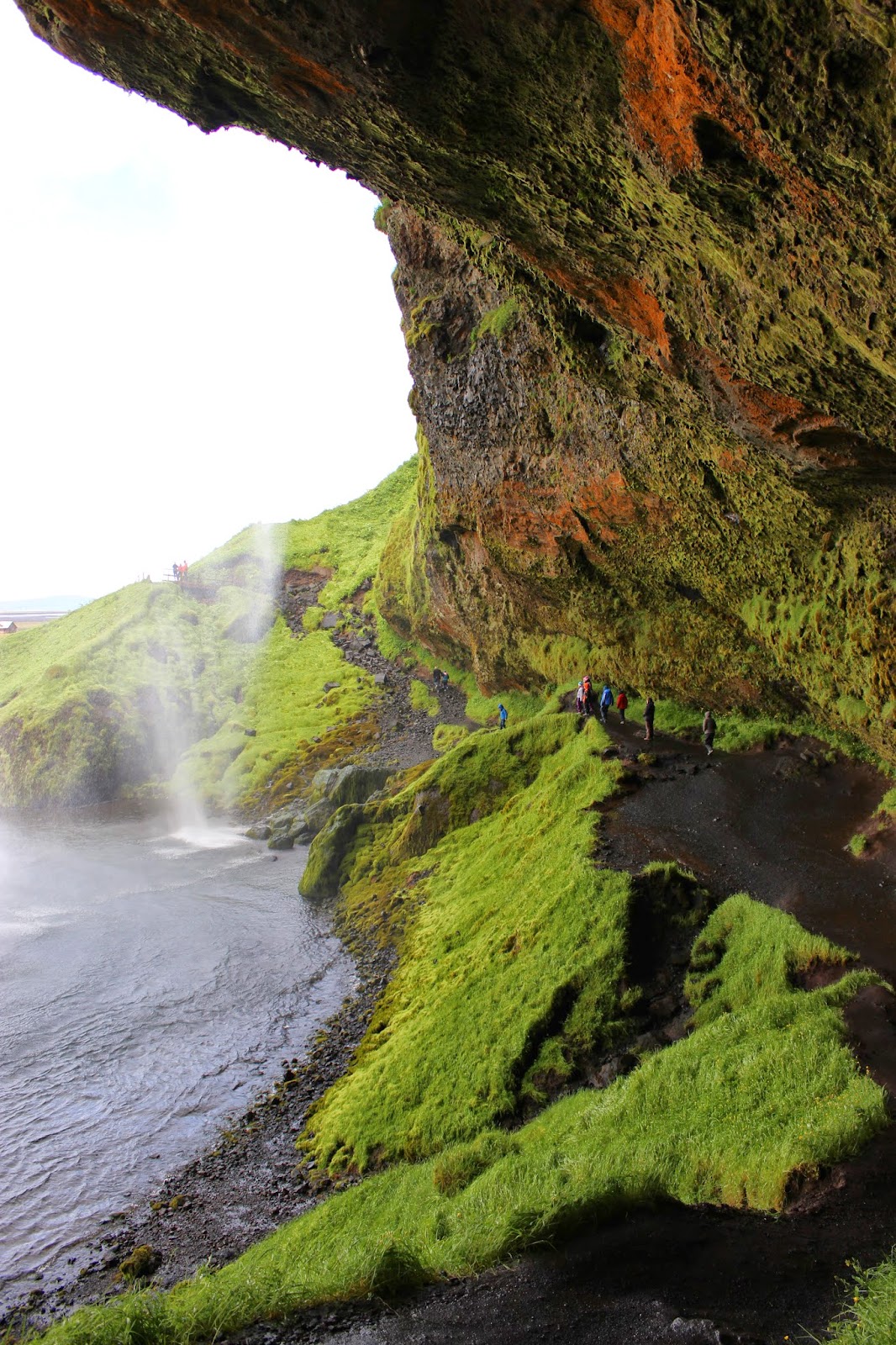 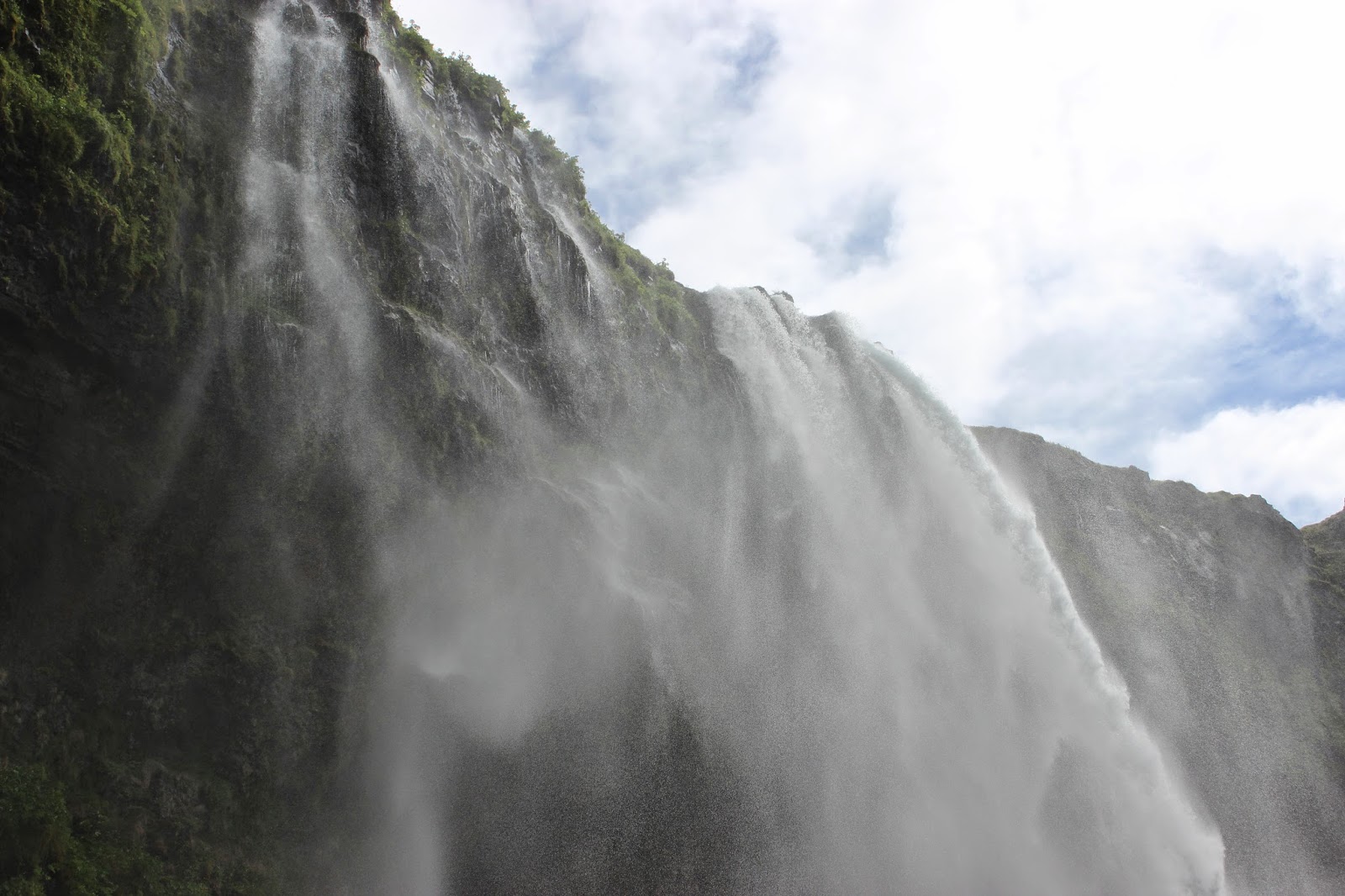 After going under Seljalandsfoss we walked over to Gljúfurárfoss and climbed up some grassy hills to get a closer look at some tiny (and as far as I know unnamed) falls.  Also we found this little hut, with some old hydropower equipment. 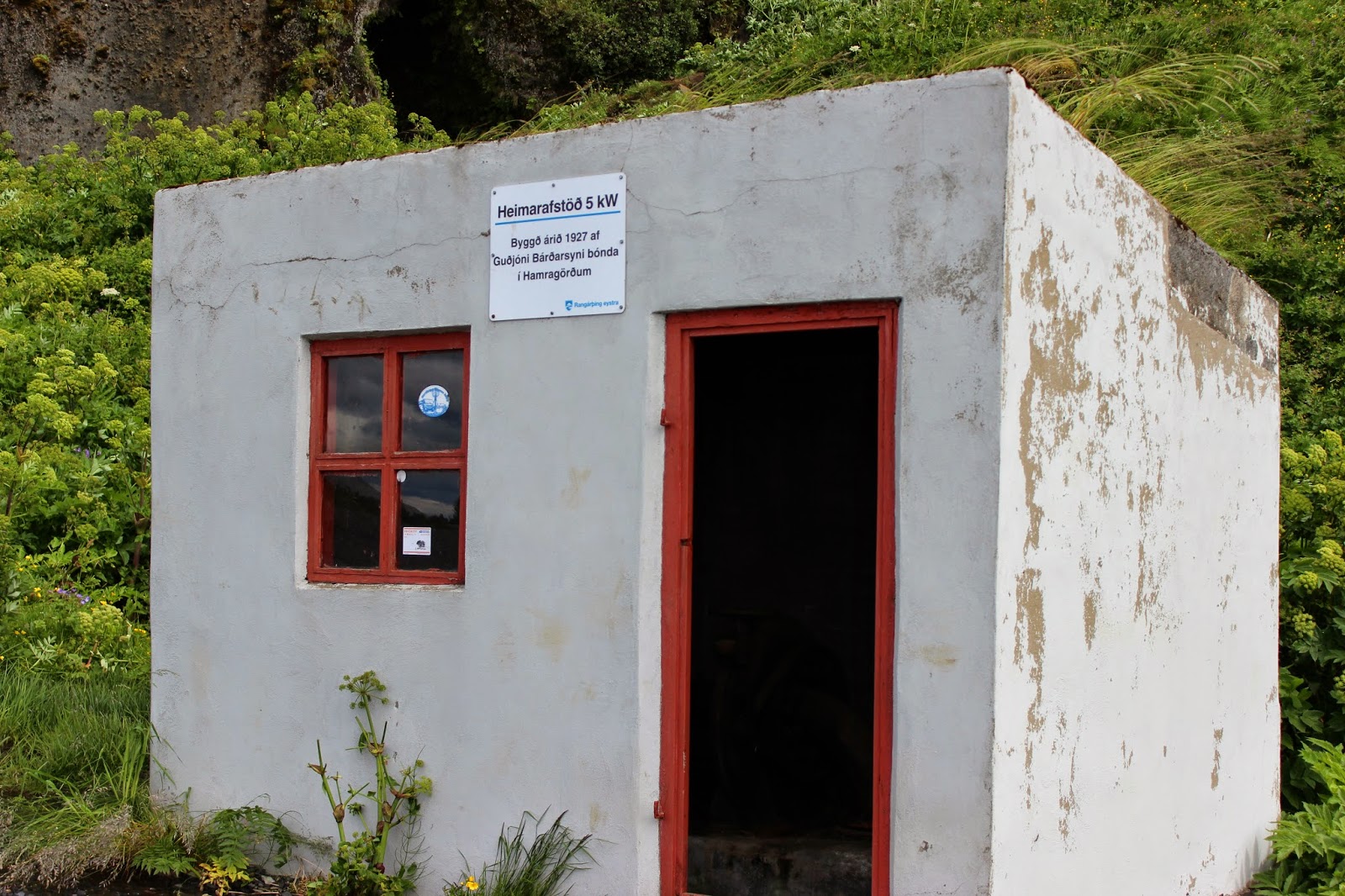 The sign says 1927, which if I remember correctly makes it at least 7 years younger than the equipment that is still running at Eagle Falls, NY.