A tale of two floor coverings

So a few things happened during our first two days that deserve individual stories, so when I get a sec I'll post them for you. Here's one. 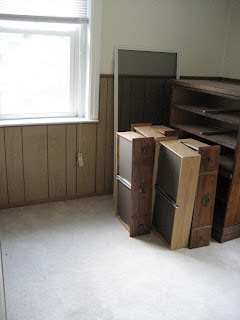 
We have three bedrooms on the second floor, all covered in carpet. Yesterday morning I pulled up carpet from two of them while chad dealt with the Verizon guy, then he went to do the third while I did something else. All of a sudden I hear him swear. Not an urgent "I just pulled a staple through my hand" sort of swear, but something different...

We had stuck linoleum. 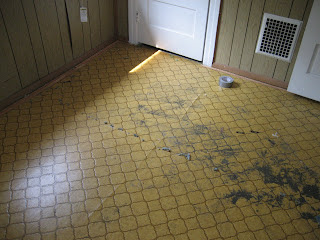 Bedroom 3 with Linoleum
Yes linoleum. Chad had pulled up the white carpet to find yellow linoleum. We didn't know what the floors would be like under the carpet, but I will admit this we did not expect (I will also admit a small moment of panic). But Chad then ripped up the linoleum and there was hardwood underneath. I mean REALLY. Who puts linoleum over hardwood? In a bedroom? 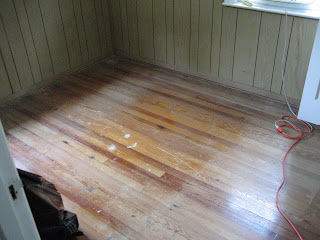 Chad's theory is that it was some kind of excersize room, based on the fact that there is a towel bar on the back of the door. My theory is these people were floor covering nutjobs.